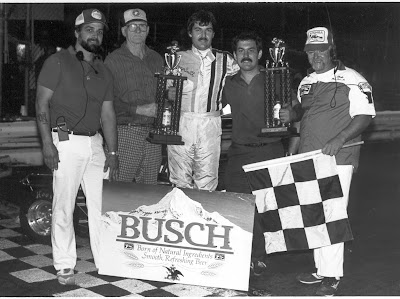 It's August 7, 1987, and John Smith has just won the main event at Pine Brook. This was the year that High Grade Beverage, a local Busch beer distributor, was a sponsor.
The photo includes not only John at the center, but also the great Roscoe "Pappy" Hough, second from left.
We often tell people how Pappy was a role model for us. We aspire to do what he did -- he remained active late in life, he got out to the races more frequently than men half his age, he did not just sit around.
Flagman Dave Innes, Jr., is at the right. Tragically, Dave would lose his life only a few years later at Wall Stadium, when a Modifed stock car jumped the guardrail and struck Dave as he manned his post in the flagstand.
Email ThisBlogThis!Share to TwitterShare to FacebookShare to Pinterest

The Roast Was Well Done 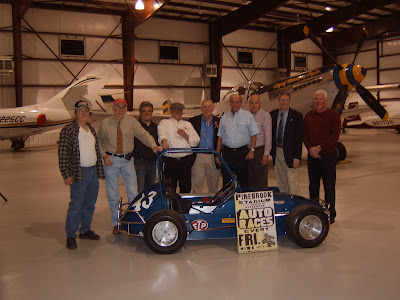 In the photo, from left to right: Blu Metz, Mike Osite, Joe Payne, Johnny Coy, Jr., Alan Mollot, Jack Bertling, Wayne Laucius, Bob Marlow, Lenny Boyd. In the foreground, the restored Boyd Roadster. In the background, just some of the beautiful aircraft in the Boyd facility.

We were not quite certain what to expect at the "roast" for Alan Mollot this past Saturday. Oh, we knew the fundamentals, because Gary Mondshein had organized roasts previously, when he was racing with ARDC. And we had participated in two of those, honoring Nick Fornoro, Sr., and Lenny Boyd.

But this was different. It was this first roast organized under the ATQMRA banner, and it was going to take place not in a catering hall, but at a county airport. And the honoree was a somewhat reluctant honoree. "I don’t know why I let Gary talk me in to this," Alan told us some weeks ago.

On that point Alan need not have worried. There exists a broad and deep pool of people who respect and admire him. And on the other point, well, let’s just say that "museum" would be a better term to describe the setting than "hangar." Technically, yes, it was a hangar, but if the caterer had not set up been tables and chairs you could have easily eaten off the floor. And if eating off the floor is not your thing, you could have eaten off any of the several meticulously-maintained historic aircraft in the room. The facility of Lenny and Donna Boyd is a sight to behold.

Add to this the tables holding scrapbooks and memorabilia, and add the two historic TQ races cars on display, and add the plentiful catered food and a DJ who understands the meaning of "background music," and nothing was lacking.

Doing the roasting was a cross-section of the many people whose racing lives have intersected with that of Alan Mollot. From Jack Bertling, the championship-winning driver whose career began before roll cages came into use, to Joey Payne, himself a championship-winning driver and the most recent driver of Alan’s signature car number 51. Former Mollot drivers Johnny Coy, Jr., Mike Osite, and Lenny Boyd were on the dias, along with Blu Metz, the immediate past president of the ATQMRA, and Yours Truly.

Missing was multi-time ATQMRA champion Don Adams, who was scheduled to be on the panel but who was kept away by last-minute matters. In the audience were several other drivers who have chauffeured the Mollot car over the years, and an assortment of drivers ranging from those who drove in the 1950s to 2009 ATQMRA champion Allison Cumens.
Of all the things that were said during the evening, perhaps the most significant were the words offered by Payne. Noting the recent passing of longtime NEMA car owner Gene Angelillo, Payne said that Mollot was to the ATQMRA as Angelillo was to NEMA – and that both men influenced their respective organizations to the same effect that Dale Earnhardt influenced NASCAR. Payne then raised a toast to Alan Mollot, to which we can add only, Hear Hear!
Email ThisBlogThis!Share to TwitterShare to FacebookShare to Pinterest 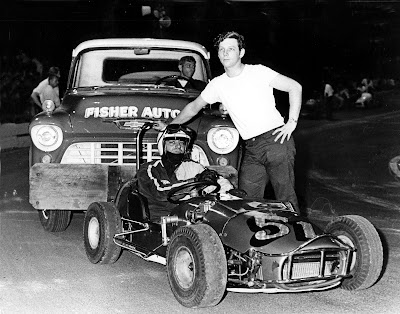 It was Bob Tidaback, we believe, who labeled Alan Mollot as "Mister T.Q." The label is the result of Alan’s having been involved in TQ racing for well over 40 years, and for his having earned innumerable race victories and several series championships over the course of those years.

This Saturday, March 20, 2010, Alan will be the honoree at a dinner and "roast" being organized by Gary Mondshein and taking place at facilities provided by Lenny and Donna Boyd. Lenny Boyd, like us, was just a teenager when Alan first became the owner of a TQ Midget race car. Lenny grew up to be a championship-wining driver, and one of those championships came at the wheel of Alan Mollot’s car.

But that’s not Lenny Boyd in the photo. No, this photo dates back to Alan’s first years in TQ racing, possibly even his first year. The driver pictured is Mike Dee, and that’s Alan, of course, alongside the car.

A fixture of the early years at Pine Brook is in this photo, too – the push truck provided by Fisher Automatic Transmissions, still in business today although it has evolved into FATSCO.

We will be at the "roast" Saturday night, helping to toss zingers Alan’s way but confident that everyone in the room, like Bob Tidaback, has the utmost respect for "Mister T.Q."
Email ThisBlogThis!Share to TwitterShare to FacebookShare to Pinterest

Finally, the green flag is waving. It took only a month to build Pine Brook Stadium, but thanks to the distractions of everyday life it has taken far longer to launch this web site. Still, better late than never.

As noted on the home page, this will be an ongoing project, never actually finished. We have countless photos, clippings, and stories to tell about the little race track that gained a national reputation.

We will be updating this blog regularly, not only with information about the history of Pine Brook Stadium, but also about relevant – and perhaps irrelevant – events in racing.

Since this is our first post to the new blog, it seemed appropriate to include a image of a clipping about the first race at Pine Brook in 1962. Written by Nat Kleinfield, it was one of many that Nat placed in newspapers in the region prior to the track’s opening night. Click on the image to open a larger version suitable for reading.

Thank you for visiting, and stop back often!
Email ThisBlogThis!Share to TwitterShare to FacebookShare to Pinterest
Newer Posts Home
Subscribe to: Posts (Atom)