When the ATQMRA Vintage Division's annual “Celebrity Roast” took place on Saturday, March 17, one of the planned surprises was reuniting Ben Trimble with the newly-restored car with which he recorded the first feature race victory by a rear-engine car, almost 40 years earlier.

That victory did not come at Pine Brook, even though Ben raced at Pine Brook regularly.  Rather, it came at New Egypt Speedway, at that time a paved track as opposed to the dirt track that it is today.  But to Ben's dismay at the time, there was no victory lane celebration.  He got to take a victory lap with the checkered flag -- remember victory laps? -- and that was that.  No trophy, no photographers, no way to prove to his wife when he got home that he had in fact won.

Well, at the roast, Ben got his victory lane celebration.  Completely unknown to Ben, roast organizer GaryMondschein had arranged for the restoration of the car Ben drove on that day nearly 40 years ago, and prepared a handsome trophy.  When Ben Trimble was called to the front of the room he was blown away by the unveiling of the beautifully restored car and the presentation of the trophy.

Ben, now in his mid-80s, told us later that when he got home following the roast, he showed the trophy to his wife and said,"See, I did win!"

In the photo, Ben, speechless, looks over the car.  That's emcee and former Pine Brook announcer Earl Krause in the background. 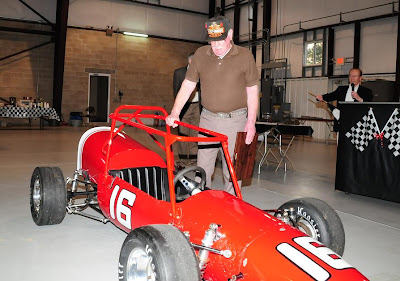