The Early Ruins of Pine Brook 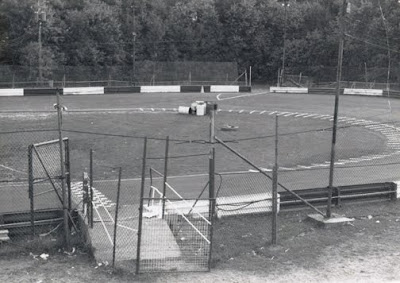 I have titled this photo "The Early Ruins of Pine Brook" because it was taken after the track had been closed, but before the fencing was torn down and the track surface torn up.

Melissa Cooke, whose father fielded a TQ for many years and who herself raced a micro-stock at Pine Brook, took this and many more photos of the doomed facility following its closing. Not visible in this shot is the fact that the bleacher seating was already gone, and that other features of the facility were already being dismantled or left to rot.
She took this shot from the roof of the box office building, where the announcer and scorers' positions were, and from where I viewed almost every race at Pine Brook starting with the first one in 1962.

We will be posting more of Melissa’s photos as time goes on.

The track closed in the Fall of 1989 following the decision by property owner Anthony Pio Costa to disallow further operation by promoter Jack Bellinato. Pio Costa had big dreams for development of the property, but it was more than a decade before anything happened. A Home Depot was built, eventually, but why racing could not have continued why development was being sought is known only by Pio Costa.
Email ThisBlogThis!Share to TwitterShare to FacebookShare to Pinterest

Here is a most unusual photo taken by Dave Innes, and sent to us by Gary Mondschein: A 1960s go-kart on a victory lap at Pine Brook. 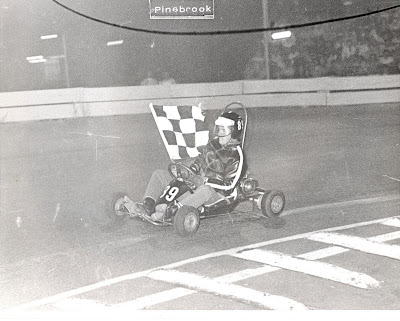 This photo appears to date from the late 60s. Early enough that there is only a roll bar on the kart (New Jersey required the same safety standards for karts in those days as it did for all other racing machines), and late enough that the infield ripple strips are in place.

Kart racing never took root at Pine Brook, despite the track's compact size that would seem to lend itself to the tiny machines. Among the reasons is that kart racing never took root in New Jersey back then, in part due to those State regulations.
Now, Gary, can you find us a photo of the one-and-only flat-track motorcycle race that took place at Pine Brook?
Email ThisBlogThis!Share to TwitterShare to FacebookShare to Pinterest
Newer Posts Older Posts Home
Subscribe to: Posts (Atom)