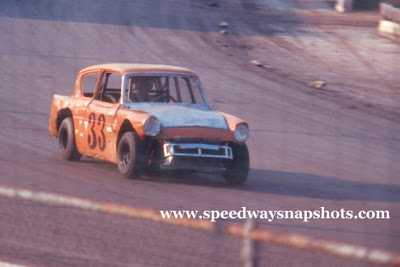 In the photo is a mid-60s English Ford Anglia, modified into an oval-track race car. This photo was taken circa 1971 at the Flemington Fairgrounds – so what is it doing here?

Well, the site on which this photo is posted, http://www.speedwaysnapshots.com/, has dozens of old photos from several of the region’s tracks, including Pine Brook. We will be adding some of those photos here as we go along. But the real point of our posting this photo is to illustrate the fact that this class of car, often referred to as "mini-stocks," was born at Pine Brook.

In 1963, looking to broaden the track’s offerings, Dick Marlow dreamed up what he termed "midget stocks," and sketched out specifications based on the size and displacement of the VW beetle. Midget stocks debuted at Pine Brook that year... without success. Despite being small cars, they were too big for the Pine Brook track, and only a handful of races were ever run.

But the racers who had put together the cars were not about to let a too-small race track hamper their efforts. They formed the Foreign Compact Racing Association, or FCRA, and soon had booked races for themselves at Flemington, Wall Stadium, Fort Dix Speedway, and elsewhere. They quickly dropped the "midget stock" name in favor of "mini-stocks," and in their relatively short history they put on some truly great races.

One of the best races we ever saw was an FCRA feature at Wall Stadium around 1969 or so. By then, nearly the entire field was comprised of Anglias. While VWs and Fiats and NSUs and Renaults and others were all tried at Pine Brook, it did not take innovative racers long to figure out that within the original specs, the Anglia was the car to have. This may explain why you never see a Ford Anglia at a vintage car show these days – they all gave their lives to mini-stock racing.

We do possess an 8mm home movie of the mini-stocks banging their way around Pine Brook, and if we ever figure out how to convert those films to digital images, we’ll post them. In the meantime, our thanks to Jeff Scott at Speedway Snapshots, for helping us illustrate the fact that "mini-stocks," by whatever name, were born at Pine Brook.
Email ThisBlogThis!Share to TwitterShare to FacebookShare to Pinterest 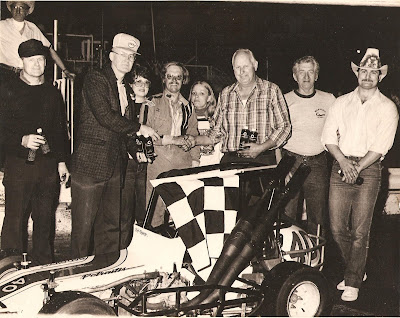 On "Old Timer’s Night" in 1983, Billy Courtwright was the winner in Pete Petraitis’ #40, one of the more successful cars of the time period. Click the photo to see a larger version.
Courtwright, of course, is the smiling young fellow in the driver’s suit, shaking the hand of car owner Petraitis. There is plenty of the event sponsor’s product, Chemlube, being passed around also.
In the background, upper left, is Jack Bellinato, who was Pine Brook’s promoter from the passing of Jack Dowie until the end in 1989. Bellinato is wearing what he considered to be his lucky hat, the hat he counted on to ward off rainouts. We don’t know the story behind Mark Allen’s hat, at the far right.
In addition to Courtwright, numerous drivers enjoyed victories in this car. Nick Fornoro, Jr.’s name is lettered on the cowl in this shot. Courtwright and Fornoro were great friends, but friction did occur as they competed for rides in front-running cars like this one. We can remember Bob Cicconi winning in this car, too.
Also lettered on the car is "One of The Bad Guys," a nickname given to a merry band of racers, including Petraitis, from Long Island. Once, when it seemed that all the racing luck and most of the officiating decisions were going against them, Will Ford lamented, "What are we, the bad guys?" A nickname was born.
Thanks to Billy Courtwright for sending us this photo. Send us your Pine Brook memories!
Email ThisBlogThis!Share to TwitterShare to FacebookShare to Pinterest
Newer Posts Older Posts Home
Subscribe to: Posts (Atom)