There Used to Be a Race Track

The original version of this story was published in the Area Auto Racing News, November 19, 2019.

MONTVILLE, TWP., N.J.-- Those who were part of the Pine Brook Speedway community, no matter where they are now, may have felt nostalgic around October 6 of this year, recalling the last race at the corner of Bloomfield Avenue and Route 46 exactly 30 years ago.

Several Pine Brook Speedway staff members shook fans' hands at the main exit gate while the track's PA system played "Auld Lang Syne" that Friday night.  Minutes before they had seen Dan Clover win what would be his only American TQ Midget Racing Association 35-lap feature of the season – and the last on the 1/10th-mile paved oval.

Some of the spectators, before heading to their cars and leaving on either Bloomfield Avenue or US Route 46, looked beyond turns three and four and the restrooms. They gazed at the five-story earthen ski-slope like mound that landlord Anthony "Tony" Pio Costa III had built over the summer as part of his plans for the property.

Track promoter Jack Bellinato, who was asked by Pio Costa to cancel the scheduled October 13th program and close the speedway a week early, was still scouting about for volunteers. He would get members from the ATQMRA, the American Micro Stock Racing Association, track staff and others to help dismantle the speedway stands the next morning.

The speculation on whether people had seen or run their last race at PBS that night was a far cry from the atmosphere of when the then-Pine Brook Stadium opened in July 6, 1962.

What the spectators saw that first night was intense racing on the ATQMRA's first purpose-built oval since its 1956 formation. The Northeast-oriented group for traditional American open wheeled race cars powered by 770 cc-or less engines had been looking for a home track.

Businessman and racing fan Richard "Dick" Marlow, of Ridgewood, had been scouting several possible venues when he came upon the 10-acre site, up for lease owned by local real estate magnate Anthony Pio Costa II, in early 1962.

The triangular tract, that also bordered the Passaic River, had been the site of the Melody Top Theater, a semi-permanent theater-in-the-round that hosted "Jazz-in-the-Woods." Although the likes of Woody Herman and Carmen McRae had performed under the Melody Top's temporary circus tent in the 1950s, it had gone out of business.

It took a month for Ken Brenn Construction, among other contractors and volunteers, to grade and pave the track. The pre-existing  ticket office, rest rooms and refreshment stand were spruced up. The new guardrail and catch fencing passed New Jersey State Police Racing Unit muster.

Dini's opening-night victory began a 28-year era of close racing on what was then a direct rung on the ladder to USAC Indycar racing.

Mario Andretti, who would go on to win the 1967 Daytona 500, the 1969 Indianapolis 500, and the 1978 Formula One World Drivers Championship, won a feature at Pine Brook on July 5, 1963. Other Pine Brook feature winners who went on to start in the Indianapolis 500 included future Indycar Chief Steward Wally Dallenbach, Jerry Karl, and Steve Krisiloff.

But Pine Brook grew its own stars, too.  Midget racing champions Johnny Coy and Tony Romit “retired” to the TQ Midgets and became fan favorites at Pine Brook.  Larry Michaels stuck to the TQs throughout his career and enjoyed both success and popularity.  Jack Bertling relished the role of “villian” at Pine Brook.  Drew Fornoro and his brother Nick Fornoro, Jr., combined for countless Pine Brook wins.  United Racing Club champion Bobby Courtwright and versatile (and ageless) Jack Duffy were at home at Pine Brook.  Bob Cicconi and Lenny Boyd were part of a younger generation who first made their names at Pine Brook.

The racing – except for a string of Wednesday or Saturday night races in 1964 or an occasional Sunday afternoon in the early and late season – was held on Friday nights throughout the track’s history.

Friday night racing, on one hand, made navigating metro New York City traffic a challenge. One regular fan from Brooklyn would take a Lakeland bus from the Port Authority Bus Terminal to its stop at Rt. 46 and Hook Mountain Road and walk a mile back, then get a lift back to get the last eastbound bus at the end of the night.

Running on Fridays, on the other, allowed editorial staff from the National Speed Sport News and the Area Auto Racing News, whose offices were 30 and 60 minutes away, to frequent PBS.  Correspondents and photographers from the Illustrated Speedway News also came to Pine Brook.

In addition, racing fans and media flocked to PBS from other area speedways when those tracks had called off their Friday racing due to anticipated rain. Pine Brook’s promoters, especially in the Bellinato era, were the last to call off and reset a program.

PBS promoters, first Dick Marlow, then the ATQMRA itself, then Jack Dowie and finally Jack Bellinato, often sought a second racing division to support the TQs.  Marlow, in 1963, came up with what he termed “Midget Stocks,” employing import cars of around 1,000 cc displacement such as VW Beetles, Ford Anglias, Morris Minors, and NSUs.

Dubbing themselves the Foreign Compact Racing Association, the “Midget Stock” drivers found that PBS was not quite big enough for them, and they did not race there often nor at all after 1967. The FCRA carried on in the late 1960s at Wall Stadium, New Egypt Speedway and the Flemington Fair Speedway.

Brief attempts were made in the 1960s to hold go-kart and flat-track motorcycle races at Pine Brook, but neither took root. Then Bill and Bob Wagner approached Bellinato in 1979 with a couple of the cars they have been previously racing in their Dover backyard.  Although their creations used Briggs & Stratton lawn mower-based engines and go kart components, the chassis, roll cage and bodywork resembled those from early or modified stock cars.

Bellinato agreed to host races for "the downsized modified stock cars," in State Police/NJ DMV language, for the fledgling American Micro Stock Racing Association. Their ranks swelled to include an alcohol-fueled modified division and a more-stock sportsman class and their numbers soon dwarfed the still-strong TQ Midget counts.

PBS became the backbone of the respective ATQMRA and AMSRA schedules.  Their combined car count, by 1989, often exceeded 100 on any given Friday.

Given the family-like PBS community, the buck usually stopped with him on most matters. He usually had to deal with an 11 p.m. Montville Township curfew.

Bellinato was known to give newcomers a break. He occasionally let an admissions-qualifying child in free and spring for his or her popcorn. He will give new vendors, from phone plan sellers to ceramic artists, a trial night by the newsstand or main gate.

Always looking for a novelty, Bellinato welcomed the likes of NASCAR Cup Champion Bobby Allison and teammate Bobby Hillin, Jr. plus John Oates of the pop rock duo Hall and Oates when they visited the track. One TQ feature was paced by a half-scale tractor trailer truck. Intermission big wheel races, which drew up to 40 children, were held regularly.

Bellinato was a man of few words, not by choice, after a bout with throat cancer.  His life had been lessons in resourcefulness and service above self.   The World War Two inductee who broke his legs during Army paratrooper training became the Totowa American Legion president, lending out the hall for ATQMRA and AMSRA meetings. The former stock car driver was hailed by NASCAR for rescuing another driver from a fiery race crash at Langhorne Speedway in 1951.

It was Krause who broke the public news that Bellinato would close PBS a week early that October 6.

Tony Pio Costa III, who succeeded his late father in 1974 in the family sand, gravel and real estate business, had other plans for the site.

The then-SCCA Corvette Challenge driver had brought earth from another project over that last summer. He the told Bellinatto that Friday afternoon that he wanted him to end the season a week early and the stands dismantled.

Bellinato quickly gathered that night's drivers, after their meetings, for a backstretch group photo. Bob Marlow, son of the track’s founder, expecting another week of racing, was on a Caribbean cruise and missed the final race.

Once the outside guardrails and fencing was taken down, there would be no more racing. PBS was the last circle track within a 30-minute drive radius of Manhattan.

The speedway itself and its buildings remained fallow while several of Pio Costa's other ideas, like a private heliport, where denied by Montville's planning board.

PBS meanwhile sat forlorn, reminding passers-by of Frank Sinatra's 1973 "There Used to be a Ballpark" lament on the 1964 demolition of New York City's Polo Grounds.

A Home Depot was eventually built one the site and opened in 2006. Bellinato searched for a successor site before cancer intervened again.  He died at home in Totowa, July 5, 1992 – one day short of 30 years since Dini's opening night victory.

The ATQMRA continues as a semi-touring series to this day. Wall Stadium, in terms of number years is its track of longest standing.

The AMSRA, divided over whether to run as a tour or settle on a home track, never fully recovered. After a half-1990 season at New Egypt and two races on the Sussex County Fairgrounds in 1992, a Microdirt faction set up its home track at Snydersville, PA.

Pine Brook Speedway, so long as recent reunion races and shows continue, will be far from forgotten.
Email ThisBlogThis!Share to TwitterShare to FacebookShare to Pinterest 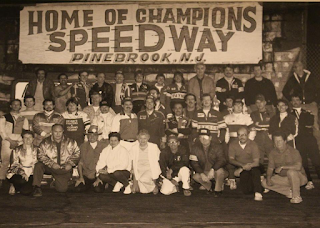