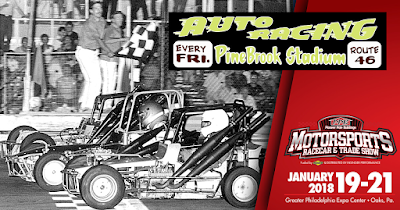 Pine Brook Stadium was the focus of the 2018 speedway reunion during the Pioneer Pole Buildings Motorsports 2018 Race Car and Trade Show, presented by Sunoco and fueled by Insinger Performance at the Greater Philadephia Expo Center January 19-20-21.  (Click the image above for an enlarged view.)

Each year a different regional track from racing's past is highlighted at the show, and in 2018 a special display dedicated to Pine Brook was erected in Hall D of the spacious Expo Center, which offers more than a quarter million square feet – some six acres – of racing related exhibits over the three day period.

Activities at the Pine Brook display included interviews and autograph sessions with drivers who raced at the tight and highly-competitive track, and attractions included a lineup of race cars representing the evolution of the machinery through the three decades that the track was in operation.

A special added attraction was a live television-style stage presentation on Friday evening, January 19, where in a one-hour late-night talk-show format, mimicking the old Johnny Carson Tonight Show, personalities from the track's history told their stories.  Dino Oberto was the host, and among those appearing on the stage in Hall E were Bob Dini, winner of the very first race at Pine Brook in 1962, brothers Drew and Noki Fornoro, prolific winners at the track through the years, Jack Duffy, who raced at Pine Brook in each of the track's 28 seasons, Lenny Boyd, a championship driver in TQs, Midgets, and Modifieds, and Johnny Coy, Jr., who raced at Pine Brook against both his father and his brothers. 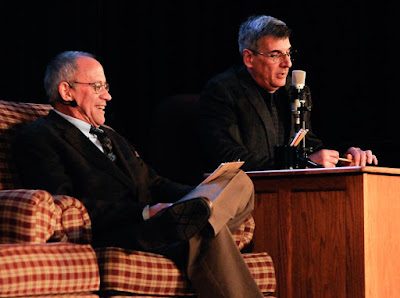